Hard to jump back in, mid-day, after a couple days break. Just sayin’.

In New Orleans We walked right on to Pirates of the Caribbean, one of my favorite rides. Dot was a bit wary of the dark at first but liked the novelty of being in a boat and eventually loved all the pirate scenes. M&M slept. Then we went over the the Haunted Mansion, where we again walked on. I told you we owned Day Two, remember?

We totally downplayed the Haunted Mansion to the girl. I figured if she didn’t know to be scared to wouldn’t really be, as my only memories were of riding in the tilt-a-whirl like contraption and seeing a ghost riding with you. I hoped she would see it as silly instead of scary. And she might have, if not for the first part, where everyone stands in the room together. Dot refers to the ride as “that one with no windows and no doors.”

Obviously it had quite an impression on her. And when the lights went out and the thunder sounded she burst into tears. Oops, forgot that part. Tony glared at me. Probably a bit scary for her, but she recovered well and tolerated the rest of the ride, albeit timidly.

And just like that we’d hit both the big attractions in New Orleans and all the traditional big rides in Disneyland. We decided to head over to California Adventure and check it out. We hoped to return to our hotel for a break afterward. But that so did not happen 😉

As we past Sleeping Beauty’s Castle we stopped Belle in an alcove off to the side. Excitedly we got in line, fished out the autograph book and camera and proceeded to have our best meet and greet yet. Dot did fantastic, Belle was so sweet, and we got some of the best pictures of the trip. On somewhat of a high, we continued on toward main street and there was Alice and the Mad Hatter!

My girl loves Alice. So much so that she was Alice for Halloween. My mom made her an adorable little Alice dress. Daddy was the Mad Hatter and Dot’s Grandmére (Tony’s mom) was the Queen of Hearts. We thought she’d be ecstatic to see Alice and hurried over to get in line.

She shrieked and refused to budge, lamenting that she’d “seen them already at Disney on Ice!” Um, okay. It still doesn’t really make sense to us, but she sticks by the logic. We went to Disney on Ice in the fall (Halloween to be exact) and Alice and the Mad Hatter were there…but so was Mickey, Minnie, all the princesses and most of the villains. I have no idea why Alice was the one she considered she’d already seen, but such was the case. I saw Alice and the Mad Hatter one other time, our last day, but D and Daddy were waiting in a line and I was holding a sleeping babe. So, no Alice autograph from this trip, though not for lack of opportunity. 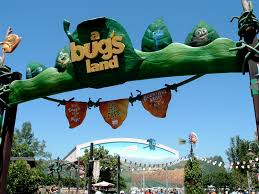 Eventually we made it across the way to California Adventure. Both Tony and I loved the Hollywood Backlot area and wished we had a chance to explore a bit more without kids. We made our way over to A Bug’s Land and Dot and Daddy quickly went on three rides (the ladybug one, the flyers, and the bumper cars)  while I held/wore sleeping M. Then we all went on Heimlich’s Chew Chew Train together.

And then the begging for a roller coaster began. Only it sounded a lot more like whining. Someone was getting sleepy!

I *think* after this we headed back toward the backlot to catch the Aladdin show. We made it just in time to watch right into the theater for a 2pm or 2:20 or something show. M was hungry so I immediately began nursing her once we sat and it wasn’t long before D fell asleep. The show was so enjoyable and perfect timing for a break for us. M&M got some much needed down time, nursing smiling and cooing at me the whole time before she eventually fell sleep. Dot got a thirty minute nap in and still got to enjoy the last half of the show. Tony and I got off our aching feet. If you get a chance I highly recommend making the effort to catch this show!

As we were leaving the theater there was a bathroom emergency and the two Ds rushed off to avert disaster. Once again, perfect timing, because we regrouped just as the hourly Pixar Parade started. My understanding it that it has been minimized due to the ongoing construction but it was on our list to catch at some point and there we were, seeing the Monster’s Inc. crowd in person. Dot was a bit worried they were going to try to “get” her, but felt safe in the stroller.

I couldn’t really blame her, when we first entered CA we saw Sully and she was NOT having it. Though, can you really blame her? He’s no princess! No matter how friendly he’s still a monster.

Now I need another pow-wow with my co-travelers to determine what happened next. Day Two was a big, long, packed day!

Mother to two school-age daughters, wife to the Father of Every Year, social worker in the domestic and sexual violence field by day and writer by the wee hours of occasional mornings.